Just when it seems that GTA V has thought of everything when it comes to parodies, it hits the gaming world with the social network LifeInvader.

Tranny Pig is Watching You POOP!

An obvious spoof to the “wall” format of previous Facebook releases, Rockstar Games gets their usual laughs by formatting the page with penises as arrows and provides a wealth of hilarious wall comments such as, “I found a pre-op picture of your wife, nice work!” or captioned picture posts such as “Tranny Pig is Watching You Poop!”

Perhaps the most interesting innovation is the LifeInvader tablet, which is another obvious parody of the elusive Facebook Phone, which is highly rumored to be in stages of production. The main difference between these two network-exclusive mobile devices is the “docking” feature on the LifeInvader tab.

This is not your typical mobile-to-mobile USB Smartphone procedure; in LifeInvader’s case, in order to dock, the user must insert their member into the biometric sheath on the backside of the device in order to upload their information and become one with their technology.

An added feature is not only does it do this automatically, but the device also demands that you dock on its own whim, not unlike a computer or phone with dwindling battery that asks to be plugged into a power source.

The World is Your Cloister 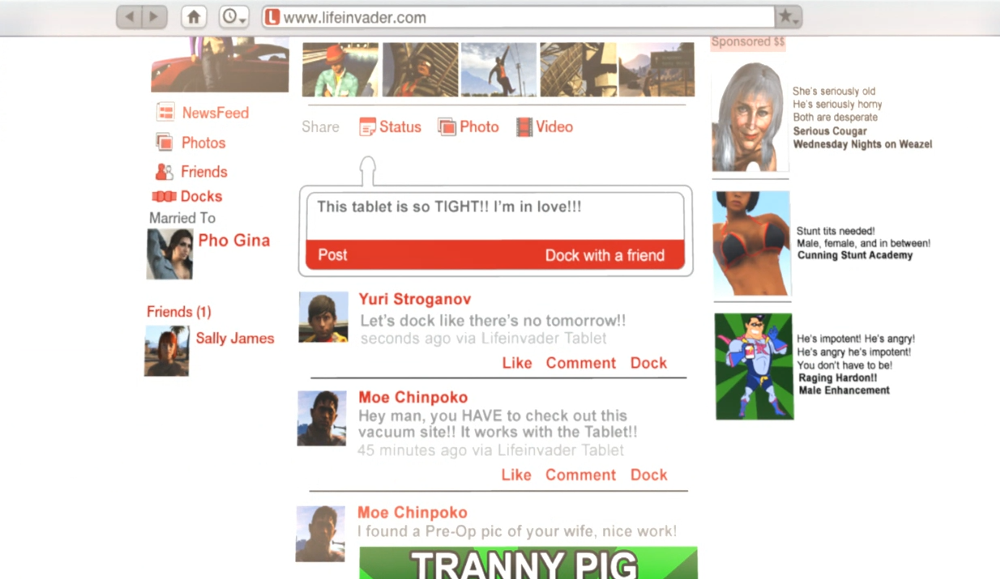 LifeInvader makes an obvious allusion to the wealth of personal information that the social network provides, making it that much easier for government officials to lurk around the privacy act and jealous ex-girlfriends to stalk your posts and pictures. So now that you can finally be one with technology, let the world read your open eBook!

The Life Invader… It’s not technology, it’s your life!