Races and deathmatch scenarios will be available to content creators.

A Game That Never Ends

The content creator is a major new feature found only in GTA Online. Players can add vehicles, NPCs, goals, weapons and markers to their own scenarios, races, or deathmatches. After uploading a scenario or game type, Rockstar’s Social Club Cloud will handle everything else. Other players can then browse stranger’s uploads or add their favorite creators to a whitelist that will prompt the Social Club Cloud to download new scenarios they create directly to your game world automatically so you’ll always have new content to play.

At first, only races and deathmatch scenarios will be available to content creators to get their feet wet, but Rockstar will be periodically dropping new tools for new types of scenarios for players to create and share.

When you first start playing GTA Online, you’ll get to create your own male, or for the first time in the series, female crime mastermind. 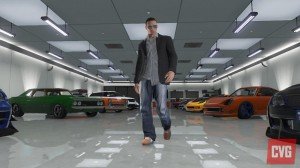 In the single-player game, players have a character wheel that will allow them to choose from Michael, Trevor, and Franklin. After the launch of and tiny update for GTA Online, a fourth custom character will be added to the wheel that will change your game over from GTA V to GTA Online.

When you first start playing GTA Online, you’ll get to create your own male, or for the first time in the series, female crime mastermind. Cementing the idea that GTA V and GTA Online are separate entities, you’ll be starting from scratch; none of the stats or information from GTA V will carry over. Instead of being left to fend for yourself, the game will take you on a short adventure to get you acquainted with how things work in the new world and send you on a mission or two to gain a little startup capital, then you’re free to explore, socialize, destroy, or create. 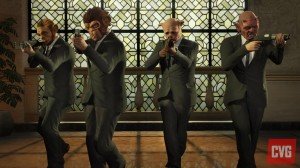 The gang’s all here

In a world where players can do anything, you might get a little worried – or maybe excited – that some players can make the game a hellish experience. Fear not; while the game does offer some player-versus-player action with a cash incentive, Rockstar has implemented a punkbuster-esque system that regulates cheaters and bad sports, as well as a “passive mode” in which players can avoid player-versus-player combat while they get the hang of things. Players that exist solely to annoy others will be tracked and swiftly punished.

Money is a big part of GTA Online

Money is a big part of GTA Online, and it will be obtainable in many ways: campaign scenarios, oddjobs, heists, player-versus-player, real estate, and a persistent stock market, to name a few. Players cannot only participate in a living market, but can tip the scales in their favor with some violent destruction-based “insider trading” techniques. 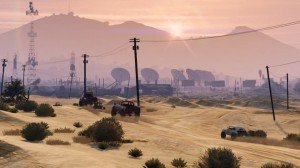 Racing Through The Desert

Players won’t have to subject themselves only to violent sundry. Nonviolent recreation will also be available in the form of mini-games found all over the map. Tennis is one revealed, but many more are available. If you’re wondering, no, nobody will be able to massacre your country club in the middle of a game.

GTA Online is aiming to be the only game players will want to play.

The Last Game You’ll Ever Need

GTA Online is aiming to be the only game players will want to play. The team wants players to never stop playing GTA Online, and they’ve got a steady stream of content planned to make sure we never put the controller down. In the future, the team hopes to make GTA Online into a platform rather than a single game, similar to current persistent MMOs. Given Rockstar’s propensity for quality as well as quantity, we think you and everyone else with a video game obsession will play GTA Online until the box stops working.